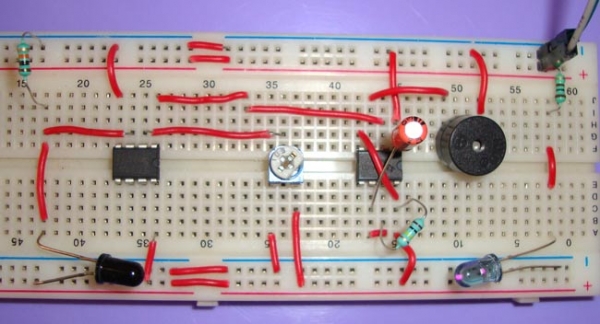 IR based security alarm circuit can detect any movement and trigger the alarm. This circuit is very useful in homes, banks, shops, restricted areas where an alert alarm is needed on any movement. This circuit is based on IR sensor where an IR beam is continuously falling on a photodiode, and whenever this Infrared beam breaks, by any kind of movement, alarm is triggered.

IR sensor consist an IR LED and photodiode, in which IR LED emits IR radiation and photodiode detects the radiation. Photodiode conducts current in reverse direction, whenever light falls on it, and voltage across it changes, this voltage change is sensed by voltage comparator (like LM358) and generates output accordingly.

In this IR based security alarm circuit, we have placed IR LED in front of photodiode, so that IR light can directly falls on photodiode. Whenever someone moves through this beam, IR rays stops falling on photodiode and Buzzer start beeping. Buzzer automatically stops after some time, as buzzer is connected to 555 timer in monostable mode.

This kind of Alarm can also be build Laser light, (like Laser Security Alarm Circuit) but the benefit of using IR sensor is that IR light in invisible while Laser is visible. Although both are useful and have different scope.

While the IR radiation is falling on Photodiode, the voltage at the non-inverting end (+) of voltage comparator is higher than the inverting end (-) and the output of the comparator is HIGH. And as the comparator output is connected to the trigger PIN of the 555 timer, so the when the Trigger pin 2 is high, the 555 output is low. So during the period when the IR rays falls on Photodiode, the 555 timer output remains LOW. To understand the working of IR sensor with comparator LM358 go through this article: IR Sensor Module Circuit

Now when there is some movement, the falling of IR rays on Photodiode gets interrupted and the voltage at inverting end (Threshold voltage) of voltage comparator becomes higher than non-inverting end, for some moment. This makes the output of comparator LOW and also makes the Trigger PIN 2 of 555 timer LOW. This will trigger the 555 timer, and 555 timer’s OUTPUT goes HIGH and Buzzer beeps for short duration. Duration of the beep can be increased by changing the value of resistor R1 or capacitor C1 (RC network in monostable mode of 555 timer IC). Note that 555 IC gets triggered when Trigger PIN 2 gets LOW.