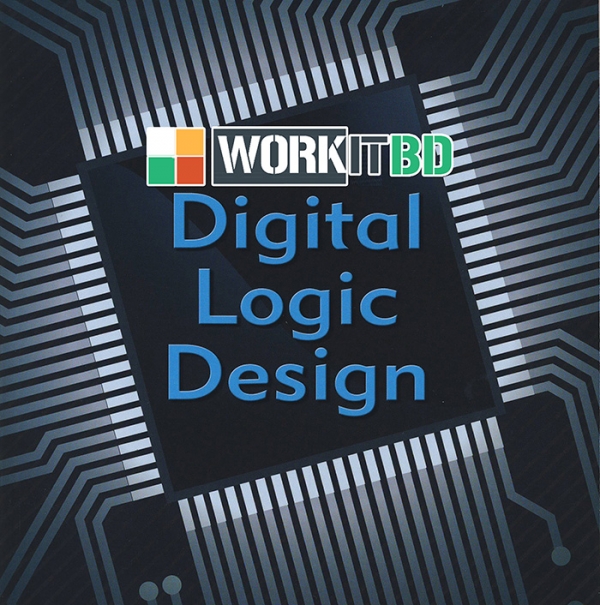 A Digital Logic Gate is an electronic device that makes logical decisions based on the different combinations of digital signals present on its inputs. Digital logic gates may have more than one input but generally only have one digital output. Individual logic gates can be connected together to form combinational or sequential circuits, or larger logic gate functions.

Standard commercially available digital logic gates are available in two basic families or forms, TTLwhich stands for Transistor-Transistor Logic such as the 7400 series, and CMOS which stands forComplementary Metal-Oxide-Silicon which is the 4000 series of chips. This notation of TTL or CMOS refers to the logic technology used to manufacture the integrated circuit, (IC) or a “chip” as it is more commonly called.

While the “ultra large scale” ULSI classification is less well used, another level of integration which represents the complexity of the Integrated Circuit is known as the System-on-Chip or (SOC) for short. Here the individual components such as the microprocessor, memory, peripherals, I/O logic etc, are all produced on a single piece of silicon and which represents a whole electronic system within one single chip, literally putting the word “integrated” into integrated circuit.

These complete integrated chips which can contain up to 100 million individual silicon-CMOS transistor gates within one single package are generally used in mobile phones, digital cameras, micro-controllers, PIC’s and robotic type applications.

In 1965, Gordon Moore co-founder of the Intel corporation predicted that “The number of transistors and resistors on a single chip will double every 18 months” regarding the development of semiconductor gate technology. When Gordon Moore made his famous comment way back in 1965 there were approximately only 60 individual transistor gates on a single silicon chip or die.

The worlds first microprocessor in 1971 was the Intel 4004 that had a 4-bit data bus and contained about 2,300 transistors on a single chip, operating at about 600kHz. Today, the Intel Corporation have placed a staggering 1.2 Billion individual transistor gates onto its new Quad-core i7-2700K Sandy Bridge 64-bit microprocessor chip operating at nearly 4GHz, and the on-chip transistor count is still rising, as newer faster microprocessors and micro-controllers are developed.

The Digital Logic Gate is the basic building block from which all digital electronic circuits and microprocessor based systems are constructed from. Basic digital logic gates perform logical operations of AND, OR and NOT on binary numbers.

In digital logic design only two voltage levels or states are allowed and these states are generally referred to as Logic “1” and Logic “0”, High and Low, or True and False. These two states are represented in Boolean Algebra and standard truth tables by the binary digits of “1” and “0” respectively.

A good example of a digital state is a simple light switch as it is either “ON” or “OFF” but not both at the same time. Then we can summarise the relationship between these various digital states as being:

There also exists a complementary “Negative Logic” system in which the values and the rules of a logic “0” and a logic “1” are reversed but in this tutorial section about digital logic gates we shall only refer to the positive logic convention as it is the most commonly used.

There are a large variety of logic gate types in both the bipolar 7400 and the CMOS 4000 families of digital logic gates such as 74Lxx, 74LSxx, 74ALSxx, 74HCxx, 74HCTxx, 74ACTxx etc, with each one having its own distinct advantages and disadvantages compared to the other. The exact switching voltage required to produce either a logic “0” or a logic “1” depends upon the specific logic group or family.

However, when using a standard +5 volt supply any TTL voltage input between 2.0v and 5v is considered to be a logic “1” or “HIGH” while any voltage input below 0.8v is recognised as a logic “0” or “LOW”. The voltage region in between these two voltage levels either as an input or as an output is called the Indeterminate Region and operating within this region may cause the logic gate to produce a false output.

The CMOS 4000 logic family uses different levels of voltages compared to the TTL types as they are designed using field effect transistors, or FET’s. In CMOS technology a logic “1” level operates between 3.0 and 18 volts and a logic “0” level is below 1.5 volts. Then the following table shows the difference between the logic levels of traditional TTL and CMOS logic gates.

Then from the above observations, we can define the ideal TTL digital logic gate as one that has a “LOW” level logic “0” of 0 volts (ground) and a “HIGH” level logic “1” of +5 volts and this can be demonstrated as:

However, between these defined HIGH and LOW values lies what is generally called a “no-man’s land” (the blue area’s above) and if we apply a signal voltage of a value within this no-man’s land area we do not know whether the logic gate will respond to it as a level “0” or as a level “1”, and the output will become unpredictable.

Noise is the name given to a random and unwanted voltage that is induced into electronic circuits by external interference, such as from nearby switches, power supply fluctuations or from wires and other conductors that pick-up stray electromagnetic radiation. Then in order for a logic gate not to be influence by noise in must have a certain amount of noise margin or noise immunity.

In the example above, the noise signal is superimposed onto the Vcc supply voltage and as long as it stays above the minimum level (VON(min)) the input an corresponding output of the logic gate are unaffected. But when the noise level becomes large enough and a noise spike causes the HIGH voltage level to drop below this minimum level, the logic gate may interpret this spike as a LOW level input and switch the output accordingly producing a false output switching. Then in order for the logic gate not to be affected by noise it must be able to tolerate a certain amount of unwanted noise on its input without changing the state of its output.

Simple digital logic gates can be made by combining transistors, diodes and resistors with a simple example of a Diode-Resistor Logic (DRL) AND gate and a Diode-Transistor Logic (DTL) NAND gate given below.

The simple 2-input Diode-Resistor AND gate can be converted into a NAND gate by the addition of a single transistor inverting (NOT) stage. Using discrete components such as diodes, resistors and transistors to make digital logic gate circuits are not used in practical commercially available logic IC’s as these circuits suffer from propagation delay or gate delay and also power loss due to the pull-up resistors.

Another disadvantage of diode-resistor logic is that there is no “Fan-out” facility which is the ability of a single output to drive many inputs of the next stages. Also this type of design does not turn fully “OFF” as a Logic “0” produces an output voltage of 0.6v (diode voltage drop), so the following TTL and CMOS circuit designs are used instead.

The simple Diode-Resistor AND gate above uses separate diodes for its inputs, one for each input. As a transistor is made up off two diode circuits connected together representing an NPN or a PNP device, the input diodes of the DTL circuit can be replaced by one single NPN transistor with multiple emitter inputs as shown.

As the NAND gate contains a single stage inverting NPN transistor circuit (TR2) an output logic level “1” at Q is only present when both the emitters of TR1 are connected to logic level “0” or ground allowing base current to pass through the PN junctions of the emitter and not the collector. The multiple emitters of TR1 are connected as inputs thus producing a NAND gate function.

Emitter Coupled Logic or ECL is another type of digital logic gate that uses bipolar transistor logic where the transistors are not operated in the saturation region, as they are with the standard TTL digital logic gate. Instead the input and output circuits are push-pull connected transistors with the supply voltage negative with respect to ground.

This has the effect of increasing the speed of operation of the emitter coupled logic gates up to the Gigahertz range compared with the standard TTL types, but noise has a greater effect in ECL logic, because the unsaturated transistors operate within their active region and amplify as well as switch signals.

The “74” Sub-families of Integrated Circuits

With improvements in the circuit design to take account of propagation delays, current consumption, fan-in and fan-out requirements etc, this type of TTL bipolar transistor technology forms the basis of the prefixed “74” family of digital logic IC’s, such as the “7400” Quad 2-input ANDgate, or the “7402” Quad 2-input OR gate, etc.

Sub-families of the 74xx series IC’s are available relating to the different technologies used to fabricate the gates and they are denoted by the letters in between the 74 designation and the device number. There are a number of TTL sub-families available that provide a wide range of switching speeds and power consumption such as the 74L00 or 74ALS00 AND gate, were the “L” stands for “Low-power TTL” and the “ALS” stands for “Advanced Low-power Schottky TTL” and these are listed below.

One of the main disadvantages with the TTL digital logic gate series is that the logic gates are based on bipolar transistor logic technology and as transistors are current operated devices, they consume large amounts of power from a fixed +5 volt power supply.

Also, TTL bipolar transistor gates have a limited operating speed when switching from an “OFF” state to an “ON” state and vice-versa called the “gate” or “propagation delay”. To overcome these limitations complementary MOS called “CMOS” (Complementary Metal Oxide Semiconductor) logic gates which use “Field Effect Transistors” or FET’s were developed.

As these gates use both P-channel and N-channel MOSFET’s as their input device, at quiescent conditions with no switching, the power consumption of CMOS gates is almost zero, (1 to 2uA) making them ideal for use in low-power battery circuits and with switching speeds upwards of 100MHz for use in high frequency timing and computer circuits.

This CMOS gate example contains 3 N-channel MOSFET’s, one for each input FET1 and FET2 and one for the output FET3. When both the inputs A and B are at logic level “0”, FET1 and FET2 are both switched “OFF” giving an output logic “1” from the source of FET3.

When one or both of the inputs are at logic level “1” current flows through the corresponding FET giving an output state atQ equivalent to logic “0”, thus producing a NAND gate function.

Improvements in the circuit design with regards to switching speed, low power consumption and improved propagation delays has resulted in the standard CMOS 4000 “CD” family of logic IC’s being developed that complement the TTL range.

Like TTL logic, complementary MOS (CMOS) circuits take advantage of the fact that both N-channel and P-channel devices can be fabricated together on the same substrate material to form various logic functions.

One of the main disadvantage with the CMOS range of IC’s compared to their equivalent TTL types is that they are easily damaged by static electricity. Also unlike TTL logic gates that operate on single +5V voltages for both their input and output levels, CMOS digital logic gates operate on a single supply voltage of between +3 and +18 volts.

Note that CMOS logic gates and devices are static sensitive, so always take the appropriate precautions of working on antistatic mats or grounded workbenches, wearing an antistatic wristband and not removing a part from its antistatic packaging until required.