SensorNet of Things: An IoT Platform 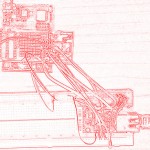 The is growing rapidly as a trend and driving a great deal of innovation. There is much talk about “connected things”, but often a lack of a simple framework to enable this connectivity. The SensorNet of Things is a project that attempts to address this by:

The SensorNet of Things is still very much in a prototype stage, and is made up of two main elements: A Hub and multiple Nodes.

The hub is permanently powered, and acts as a bridge between a network of various sensors and the internet. The sensor-side interface is a sub-1GHz RF interface, with a proprietary protocol. The internet-side interface uses the Wiz550io module, to establish a HTTP connection to a server. Of course this server may be a local server.
The hub communicates the readings from the sensor network to the internet; the structure of the code is such that it provides for development of return communication allowing the configuration of settings etc.

A Network of Sensor Nodes

A maximum of 128 sensors may be connected to the hub, to allow environmental monitoring and reporting. The code is structured to allow a variety of sensors to be connected, including analog (temperature, humidity, barometric, gyro, light, moisture, etc.) and digital state (appliance monitoring, door/access, etc.). The sensors can either operate on a timed-basis (submit readings every x seconds/minutes/hours/etc.) or on an interrupt-basis (eg. submit reading when door opens).

The Hub and Sensors are based on the as the microcontroller, and then the for Hub-to-Node RF Communication. Currently internet connectivity is implemented using the . The prototype has been built using TI’s Launchpad ecosystem – the and the . At a total cost of $30 for both from TI, it’s a really cost effective way to prototype.

The sensors initiate all communication, in order to allow them to operate in low-power modes, using interrupts to drive the readings. The sensor transmits a reading, and waits for an acknowledgement from the hub. If no ACK is received, the sensor retries 3 times before going back to sleep. Provision has been made (although not implemented) to allow the hub the transmit instructions back to the sensor.