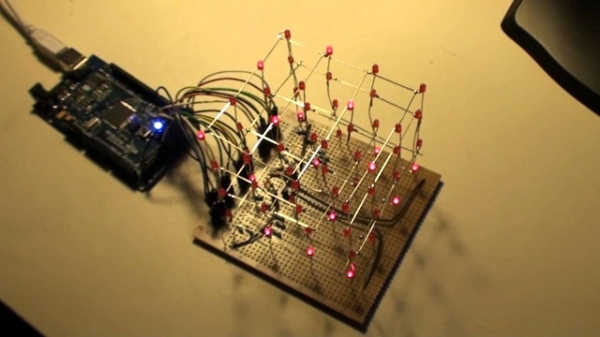 64 LEDs makes up this 4 by 4 by 4 cube, controlled by an Atmel Atmega328 microcontroller [I’m using an Arduino UNO] Each LED can be addressed individually in software, enabling it to display amazing 3d animations!

First of all, you need quite a bit of time to solder together 64 leds ;)

Step 2 : The Principle Of This Design

Before you begin construction, it’s important to have an complete overview of how this thing is going to work so you can improvise and identify errors as you go along. Some LED cubes use a single output pin for every single LED – however in a 4x4x4 cube, that would need 64 pins – which we certainly don’t have on an Arduino Uno. One solution would be to use shift registers, but this is unnecessarily complicated.

In order to control all those LEDs in just 20 pins, we’ll be using a technique called multiplexing. By breaking the cube down into 4 separate layers, we only need control pins for 16 LEDs – so to light a specific LED, we must activate both the layer, and the control pin, giving us a total requirement of 16+4 pins. Each layer has a common cathode – the negative part of the circuit – so all the negative legs are joined together, and connected to a single pin for that layer.

On the anode (positive) side, each LED will be connected to the corresponding LED in the layer above and below it. Essentially, we have 16 columns of the positive legs, and 4 layers of the negative. Here’s some 3D views of the connections to help you understand:

Soldering grids of 4×4 LEDs freehand would look terrible! To get 4 perfect 4×4 grids of LEDs, we use a template to hold the them in place.

Since we won’t be using a full metal structure to solder to, we want all the legs of the LEDs to overlap by about a quarter and give rigidity to the structure. Fold the cathode of your LEDs – the side with the flat notch in the head and the shorter leg – over as shown in the diagram. (It doesn’t really matter if you bend it left or right, so long as you’re consistent and it never touches the anode)

I wanted to make the cube as easy as possible to make, so I chose to use the LEDs own legs as much as possible. The distance between the lines in the grid was decided by the length of the LED legs. I found that 25mm (about an inch) was the optimal distance between each led (between the center of each led that is!) to enable soldering without adding or cutting wire.

We make the cube in 4 layers of 4×4 leds, then solder them together.

Now that we have those 4 layers, all we have to do is to solder them together.

Put one layer back in the template. This will be the top layer, so choose the prettiest one :)

Here is the circuit

For the four negative layers, I dropped a single wire down from each layer, then just pulled them off to the side

Download the demo patterns and code from instructable user forte1994. He’s also provided a helpful online tool for designing the byte patterns to customize your own sequence.