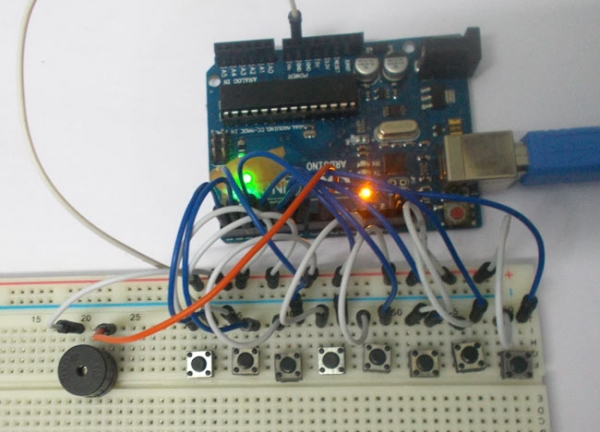 In this project we will develop a tone generator using Arduino Uno. We will have buttons interfaced with the UNO and each one of them generates different intensity of tone. The frequency of tone generated by the UNO is same at every internal. It’s the intensity of the sound which changes with each press. This is the one of the easiest way to make a piano with Arduino Uno. Also check thisPiano circuit.

The tones can be increased up to 20. This gives the best tone variation and much smoother changes. The intensity of the tone is changed by PWM (Pulse Width Modulation). An example of PWM is shown in below graph.

In PWM, the frequency of signal or the time period of signal (Ton + Toff) is always constant. Only the ratio of TURN ON and TURN OFF time changes. For example in the second graph in above figure, the TURN ON time is 80% and TURN OFF time is 20% of complete duration.

We are going to program the UNO to provide a PWM signal of different duty ratio for each of buttons. So we have a tone generator at hand which generates a different tone with each button press.

The circuit for tone generator is shown in below diagram.

To filter out the noise from supply voltage capacitors are placed across terminals as shown in the diagram.

The PWM of Arduino Uno can achieved at any of pins symbolized as “ ~ ” on the PCB board. There are six PWM channels in UNO. However we cannot use PWM pins established over the PINS 0-7, as the PINS are preferred for buttons interface.

There is a reason for selecting PINS 0-7 as inputs, because the PINS 0-7 represent the PORTD of microcontroller. So in the latter case we can take the complete BYTE of PORTD.

Now for getting a different duty ratio PWM, we are going to use following command.

From above condition we can directly get the PWM signal at the corresponding pin. The first parameter in brackets is for choosing the pin number of PWM signal. Second parameter is for writing duty ratio.

With that we will have a PWM signal whose duty ratio changes with each button. This being given to buzzer, we have tone generator. Working of this Arduino based tone generator is explained step by step in C code given below.

pinMode(i, INPUT_PULLUP);//take pins0-7 as inputs with default high or pulled up pins.

// the loop routine runs over and over again forever: